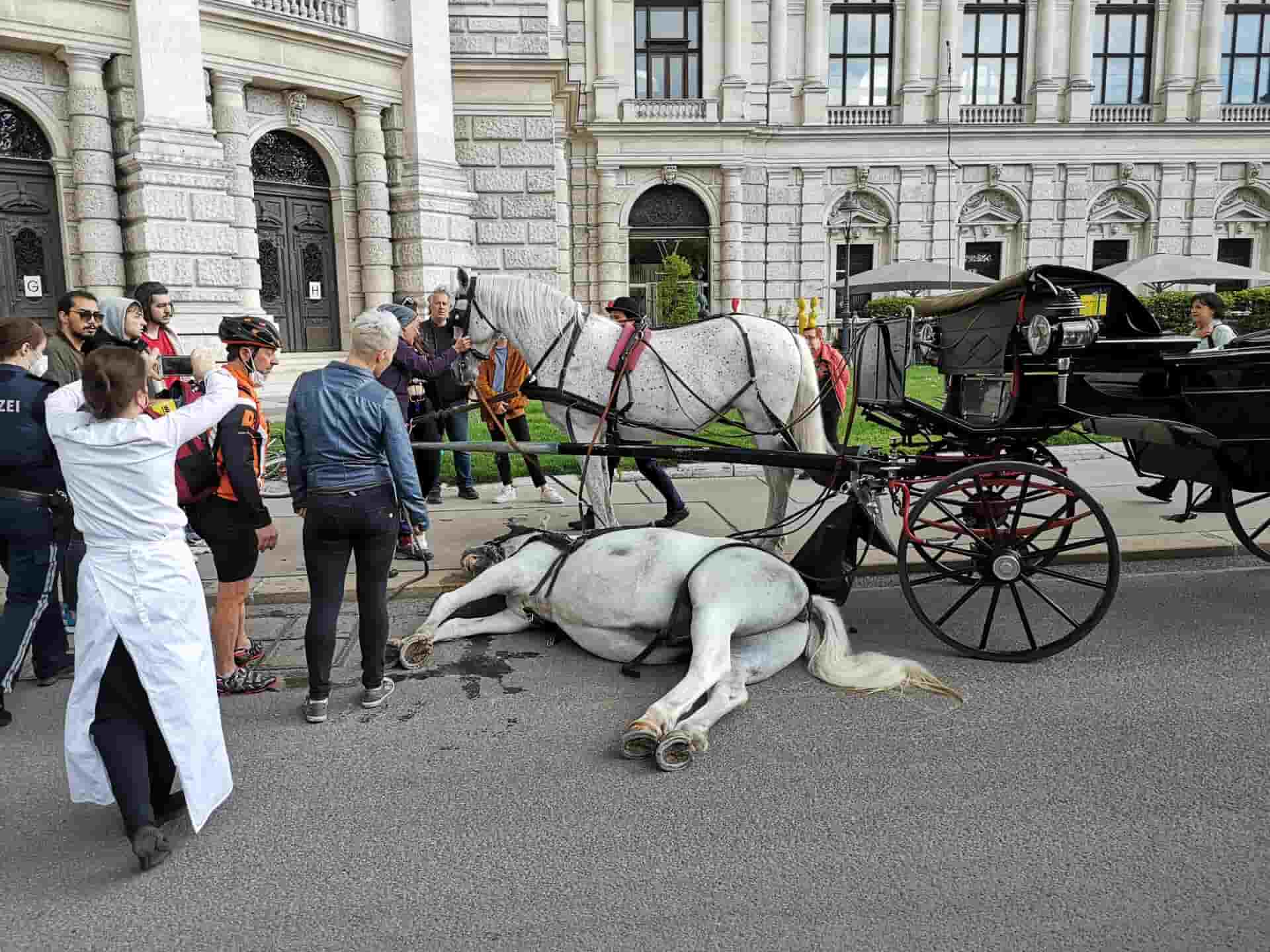 When a heart-breaking video of an exhausted carriage horse being flogged by its driver after it collapsed on a Manhattan sidewalk in New York went viral it sparked outrage last summer. Ryder, who became the unwitting symbol of modern day animal abuse, eventually had to be rescued by NYPD’s Mounted Unit though he sadly died later.

The shocking incident rekindled a long-running debate on the ethics of taking horse carriage rides in cities in the name of ‘fun’ and ‘tourism’. The question is, how many more Ryder’s will it take for real action to be taken and for this anachronistic practice to be outlawed for good?

Most passengers are blissfully ignorant of the suffering behind the deeply troubling tradition of horse and carriage rides. The traffic-choked streets of New York, Berlin, or any urban setting for that matter, are no place for these highly intelligent and social animals.

Forced to pull six times their own weight, and spending as long as nine hours in a harness, carriage horses endure relentless noise and pollution. As a result, they develop a long list of chronic health conditions, from lameness caused by pounding the roads, to respiratory disease resulting from constant exposure to toxic fumes.

Toiling in all weather, horses can succumb to frostbitten hooves from salt-treated roadways, while the sweltering summertime heat, when asphalt surfaces are 10-40 degrees higher than the air temperature, can cause a horse’s hoof to separate from the bone.

After an all-too-brief retirement on a farm in upstate New York, 26-year-old Ryder, who turned out to be 13 years older than his owner claimed, passed away from cancer in October.

‘Ryder was emaciated and had muscle wasting: clear signs of a serious illness or disease. And yet the entire time he was forced to pull a carriage in the summer heat for ten hours a day,’ Edita Birnkrant, Executive Director of NYC-based animal rights group: NYCLASS (New Yorkers for Clean Liveable and Safe Streets) tells The Ethicalist.

In stark contrast, the average working life of a police horse in New York is 15 years – four years less than a carriage horse in the city.

Ryder was one of 200 carriage horses that haul tourists around Manhattan, in what’s marketed as ‘a quintessential NYC experience,’ and one that’s been a Central Park fixture since the 1860s.

But far from being quaint, traditional or romantic, these rides lead to a miserable life for the horses, who are kept in dilapidated tenement buildings when they’re not working. ‘Their stalls are tiny, half the size recommended for large draft horses by horse experts,’ explains Edita.

In August this year, non-profit horse rescue group Unbridled Heroes Project exposed the appalling conditions NYC’s carriage horses are kept in when they filmed undercover in the stable that Ryder called home on West 38th Street.

A recent survey conducted by John Zogby Strategies online (commissioned by Voters for Animals Rights) confirms that 71 per cent of New Yorkers back a ban on horse and carriage rides in the city, proof that its tourists driving this cruel industry – one that’s riddled with accidents.

‘Horses have a highly-developed flight drive,’ explains Edita. ‘They have evolved to bolt and run when startled or frightened. This is a deadly recipe for disaster in Midtown Manhattan.’ Shouting people, sirens, honking horns and barking dogs can all “spook” horses, causing them to panic and run into oncoming traffic. Fundamentally, cities are not only an unsafe environment for the horses, but for motorists and pedestrians too.

PETA (People for the Ethical Treatment of Animals) laid bare America’s shocking catalogue of carriage horse injuries and fatalities in their damning report. What’s less well-documented are the numbers of ageing carriage horses in the USA that, rather than being retired to pasture, are butchered for pet food.

Few cities are more steeped in horse and carriage ride tradition than Vienna. Part of the Austrian capital’s so-called proud imperial heritage, its 300 Viennese fiakers (horse-drawn carriages), have been clacking on its historic centre’s cobblestones for centuries.

Tourists splash out roughly $US 55 for a 20 minute ride – a “bucket-list experience” gleefully endorsed by the city’s own tourism board. ‘By law [carriage] horses are not required to have a paddock or actual grass,’ Georg Prinz, activist coordinator for animal advocacy organisation, VGT Austria tells The Ethicalist. ‘During the summertime, they have to work up to 13 hours a day, [in temperatures] up to 35 degrees Celsius.’ The measurement is misleadingly taken in shade outside the city centre.

Vienna falls alarmingly short of standards set by other European cities like Berlin, where carriage horses are forbidden from working in temperatures exceeding 30 degrees Celsius. Meanwhile, in Rome, ‘[carriage horses] are only allowed to operate in the evening hours in summertime,’ Prinz says.

In Dublin, 1,200 miles away, carriages congregate en masse in grand Georgian squares like Merrion and sightseer favourites St. Stephen’s Green and the Guinness Storehouse. While only 16 carriage drivers are officially licensed in the Irish capital, there’s reported to be hundreds of illegal horse carriages in the city owing to a loophole in a Victorian legislation that’s enforced to this day.

In South America – where images of horses happily romping through the pampas comes to mind – these sentient animals continue to be exploited for touristic purposes in cities like Cartagena. Despite strong opposition from the Colombian capital’s own residents, more than 60 carriage horses work the crumbling colonial streets of its UNESCO-listed old city.

With no regulations to abide by, the city’s pesebreras (coachmen) target the scores of passengers disembarking from the Caribbean cruise ships that dock here, many ignorant of the cruelty behind their popular excursion.

But thanks to Colombian comedian Alejandro Riaño, there is a glimmer of hope. He successfully crowdfunded for the city’s first solar-powered carriage this year after a fallen horse was brutally forced back into its harness to continue its tour, despite being in no fit state to do so.

Despite Cartagena’s appalling track record, Latin America has been leading the global charge when it comes to embracing horse-free power. Mexico’s Guadalajara became the first city in the world to transition from horse-drawn to electric carriages in 2017. Meanwhile, in the country’s Riviera Maya, Cozumel banned the outdated practice in 2019 and Mérida (a city in south-eastern Mexico) followed by example this May by introducing six horseless e-carriages and retiring a tradition that’s endured for over a century.

Slowly but surely, the electric revolution is gaining ground. Horse and carriage rides are already banned in major metropolises such as London, Paris, Las Vegas, Toronto, Chicago and Beijing. However, the tradition is still alive and well in regions of the Mediterranean including the Balearic Islands. But change could be afoot. This August, Palma City Council announced that horse-drawn carriages will be cleared from the city’s streets by 2024 in favour of electric alternatives that will keep its drivers in gainful employment.

Birnkrant explains that (if passed), the PETA-backed ‘Ryder’s Law’ ‘would remove carriage horses from New York’s streets and replace them with 21st century, cruelty-free and safer electric carriages.’

It’s high time New York and the rest of the world relegated this brutal and archaic tradition to the history books for good, and let these beautiful animals live out their days on open pasture where they belong.